So far we have seen how free particles move in spacetime, and it led us to the concept of geodesic. But we have to understand in more details how these two concepts are related.

In fact, what we are looking for is the generalization for the four-dimensional spacetime of the two-dimensional Gaussian curvature, e.g a way of determining the intrinsic measure of curvature, depending only on distances that are measured on the surface, not on the way it is embedded in any space.

If you take a flat piece of paper and bend it gently, it bends in only one direction at a time. At any point on the paper, you can find at least one direction through which there is a straight line on the surface. You can bend it into a cylinder, or into a cone, but you can never bend it without crumpling or distorting to the get a portion of the surface of a sphere.

In Gaussian terms, the cyclinder curvature - defined as the product K1K2 of the two principal curvatures - is null because one of these principals - the one along the axis of the cylinder - is null.

In this article, we want to find a test similar to the piece of paper bending used in two dimensions.

In four-dimensional spacetime, the test will be to try to transform a general metric gμν to the Minkowski form ημν by an appropriate coordinate transformation xμ -> x'μ

From our previous article Generalisation of the metric tensor in pseudo-Riemannian manifold, we know that the metric gμν has 10 independant components (16 - 6 as the tensor is symmetric.

So we have 4 degrees of freedom to fill 10 conditions, which is generally not possible: as expected, it is generally impossible to reduce a metric describing a curved spacetime to the one of a flat spacetime by a coordinate transformation.

It appears that we have to be less ambitious and try to find a primed coordinate system that locally only , i.e around a event P in spacetime

If we take the analogy of the curved surface of the earth, we have to isolate lots of little square patches, each patch being pretty near flat. 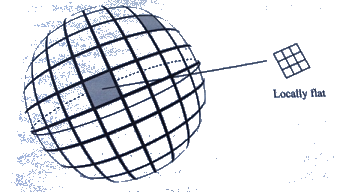 We recall from our article Generalisation of the metric tensor in pseudo-Riemannian manifold that an arbitrary metric could be expressed as:

Each of the partial derivatives is a function of the primed coordinates so, for a region close to the event point P, we can expand these derivatives in Taylor series:

These three quantities represent constant coefficients that we are allowed to choose freely in order to find a local inertial frame around the event P.

Let's try to count the degrees of freedrom we have at each step of this Taylor series development.

Concerning the coefficient bμνα, we have still 4 possible values for α but only 10 possible distinct choices over 16 for μ and ν as the order of the partial derivatives doesn’t matter here (for example, δ2xα/δx'1δx'2 = δ2xα/δx'2δx'1[1]). There are then 4x10 = 40 values for bμνα that we can freely choose.

When it comes to cμνβα, again the order of the 3 partial derivatives doesn’t matter, so for each value of α we can have μ=ν=β, or two indices equal with the third different, or all three indices different. We have then to calculate the number of times that each possibility (0,1,2,3) appears in the triplet (μ,ν,β): by example in the case of the three following combinations c1023 = c1032 = c1302, we would say that they are all equivalent to one time 0, one time 1 and one time 2. This could represented with the notation x||x|x where the first case represents the number 0, the second case represents the number 1 and the third one represents the number 2. Another example would be the three distinct coefficients c1002 = c1020 = c1200 which would be represented in a unique way by as xx|||x (2 number zero in the first case, 0 number 1 in the second case and 1 number 2 in the last case). The number of independants coefficients cμνβα is then obtained by the number of possible unordererd permutations of three x and N-1 symbols | in N+2 cases, which is by definition (N+2)!/(3! x (N-1)!) = (N+2)(N+1)N/6.
As α can take N values, we finally get the number of possibilities = (N+2)(N+1)N2/6 so for N=4, we get the number of independant coefficients cμνβα = 16x5 = 80 values.

We can also think of the unprimed metric as a function of the primed coordinates, and expand it in a Taylor series as well:

We can now substitute the product of the partial derivatives with the non primed metric into one and collect terms. Due to the large number of indices floating about, it’s easier to use a condensed notation for this step.

The transformation now becomes, up to second order terms:

If we are finally expanding the Taylor expansion of  g(x'p + Δ'x) where every factor is now a function of x', we get:

We therefore have, taking each term separately and restoring the indices:

As we have seen above,  every choice of the two indices α and μ gives an independent quantity, so there are 16 different variables and thus we have 6 more degrees of freedom than we need to solve g'μν = ημν ( ημν being symetric only requires 10 independant coefficients).

Again, as g'μν is symmetric, we have 10 distinct values which have to be mutlitplied by the 4 distinct values of the partial derivative, which gives 40 independant equations. Do we have enough freedom degrees to verify that d'γg'μν = 0 around the point P?

Recalling from above that there are then 4x10 = 40 values for bμνα that we can freely choose, we just enough degrees of freedom to fill this condition.

We then have just defined what is called a Local Inertial Frame (LIF): mathematically, it is a coordinate frame in which the metric is locally equivalent to the Minkowski metric and for which we impose the constraint that all the derivatives of the metric are locally equal to zero. Physically, that's the free falling referential from our famous Equivalence Principle, in which gravity seems to disappear locally .

The last equations to be checked concern the second order derivatives of the metric:

Given the fact that both the metric and its partial derivatives are symmetric by swapping the indice order, this line represents actually 100 independant equations.

Once again, the values of the non primed metric and of its derivatives are given, and as we have already determined the values of different a and b, our freedom is limited to the 80  independant values of cαμνγ (see above for demonstration)

It means that there will remain 20 second derivatives that we will not be able to set to zero: it turns out that this is a result of the inherent or intrinsec curvature of the spacetime - so it’s not surprising that we can’t get rid of that.

We have found then a test equivalent to the K=k1k2 gaussian curvature for four-dimensional Riemannian manifold: if the surface is curved, we can not find a frame for which all of the second derivatives of the metric could be null.  And we will see in a later article that these 20 extra derivatives are precisely embedeed in an object called Riemanian tensor of fundamental importance to assess the spacetime curvature.