The next logical question should be: what could be the expression of the spacetime momentum vector?

Let's be naive and suppose first that our spacetime momentum vector could be written as p = mv with v the classical newtonian velocity vector.

Let us consider what is commonly called an inelastic collision, i.e. two objects of the same kind, moving oppositely with equals speed v, hit each other and stick together, to become some new, stationary object (to help visualize this, we can imagine the two particules as being chewing gums...).

Let us estimate the momentum of the system before and after the collision in referentials R and R', with R' attached to the first left particule.

So in our case, in R' referential, we can write:

Obviously, as momentum must be conserved in all referentials[1], our hypothesis was wrong, and the relativistic momentum could not equal the particle's mass m multiplied by its ordinary spatial velocity v, as it is defined in Newtonian mechanics.

It would be certainly a good idea to multiply the four-velocity by the rest mass m of a particle to get our four-momentum definition:

Therefore, as four-momentum is given by Pμ=mUμ, we can write: ημνPμPν=m2ημνUμUν=m2c2

and our four-momentum with norm mc could be respresented with its two time and spatial components (respectively γmc and γmv) as follows on a spacetime diagram:

The proposed momentum arrow always has a length equal to mc  and points off in the direction of travel of the object in spacetime. 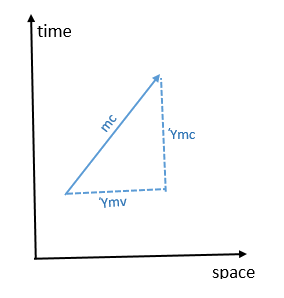 Remark 1: In Newtonian limits, i.e if the speed v of our object is much less than the speed of light c, then γ is very close to  one. In that case, we regain the old-fashioned momentum, namely the product of the mass  with the speed p = mv.

Remark 2: With this new expression γmv, what happens if a constant force (which is the rate of change of momentum) acts on a body for a long time? As opposed to Newtonian mechanics where the body keeps picking up speed until it goes faster than light - the mass being constant-, in relativity, the body keeps picking up, not speed, but momentum, which can continually increase because the mass is increasing, and the velocity could never reach the speed of light.

In his book SIx-Not-So-Easy pieces[2], Richard Feynman illiustrates this form of 'inertia' when v is nearly as great as c, by the example of the synchrotron used in Caltech to deflect high-speed electrons: they need a magnetic field that is 2000 times stronger than would be expected on the basis of Newton's law.

So we appear to have two new laws of physics: both γmv and γmc are conserved quantities.

So what does it mean exactly that γmc should be conserved?

But if  γmc is conserved, than so too is γmc2 simply because c is a constant. Then in the limit of small speeds (v<<c), we can write:

Thus, even if an object is standing still (v=0), it has still energy associated with it, and that energy is given by Einstein's famous mass-energy equation E = mc2.

To be more precise, if we assume with Einstein, that the energy of a body always equals mc2 (refer to Einstein paper outlines E=mc2, November 21, 1905), or that the mass is equal to the total energy content divided by c2, we should then write, where the "rest mass" m0 represents the mass of a body that is not moving:

If we come back to our example of the collision of two lumps of clay, applying the conservation of the total relativistic energy gives:

Let's assume that each lump of clay has a mass of 5kg, each travelling at 3000m/s, the increase of mass of the system will be:

which is an exceedingly small amount!

We still have to elucidate a last question: the total relativistic energy's formula and the mass-energy equivalence equation we have established before can not apply to massless particule such as photons.

From above, we know that the norm of the four momentum is a constant in all inertial frames equals to rest mass x c = m0c.

And for a photon, which has zero 'rest mass' but still does have energy and momentum, we get

which describes the energy-momentum relation for a photon.

As the energy of a photon is given by E = hc/λ, where h = 6.63x10-34Js (Planck's constant) and λ is the wavelength, we can easily calculate for example the momentum of a photon of blue light, which has a wavelength of 450nm

[1] Should it not be the case, then the fundamental Principle of Relativity would be violated, as we would have a way to distinguish a 'rest' frame where the conservation of momentum law would be valid (our referential R above) from a 'moving' frame where this law would not hold (our R' referential).