In the previous article, we have presented one kind of 'twin paradox', e.g. how two persons born at the same time but at  a different location in the Earth referential and with one person flying by in a rocket animated with constant velocity v, would apprehend the other one's ageing process, given the fact that in special relativity time dilation is symmetrical. We have resolved this apparent paradox by showing that from the moving referential's perspective, the two persons were not born at the same time (well known end of simultaneity phenomenon in special relativity).

In this article, we will focus on the more known version of the so called 'Twin paradox' which involves again two twins born at the same time and at the same location in the Earth referential, with  one twin remaining on Earth while the other twin takes off on a trip to some distant star at relativistic speeds and comes back. The second difference with the previous article's thought experiment is so that the travelling twin has to accelerate to take off and to  decelerate to land.

This is sometimes considered a paradox in that each twin sees the other twin as travelling, and so, it is argued, each should see the other aging more slowly. But in fact this is based on a misunderstanding of relativity (only the inertial observers are subjects to the same laws of physics) and because here one twin only experiences acceleration and deceleration, he is the only one of the two twins who ages less. 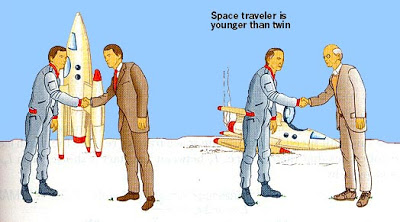 We will consider that the space ship is traveling from Earth to a distance d of 10 light-years, at a speed v = √3/2c  so that the dilation time factor γ equals 2, as in the previous article.

Let's use the spacetime diagrams again to try to visualize the situation from each twin's  perspective.

For the rest of the article, we will name T the traveller twin and S the sedentary twin staying on Earth (no luck for him ;-)

Outbound Travel to the Star

But as we know, from the the traveller's T perspective, his  Proper time or time measured at rest in his own referential will be dilated by the Lorentz factor, so in our case,  twin T will reach the star after only 11.54/2 = 5.77 years (blue line in the diagram below) 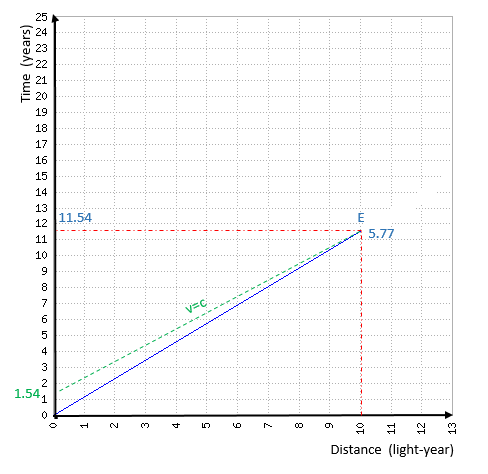 What does the twin on Earth measure

S knows that T flying at a velocity of √3/2c  should have reached the 10 light-years far away star after 11.54 years.

However, the light takes 10 years to travel from the star back to the Earth. 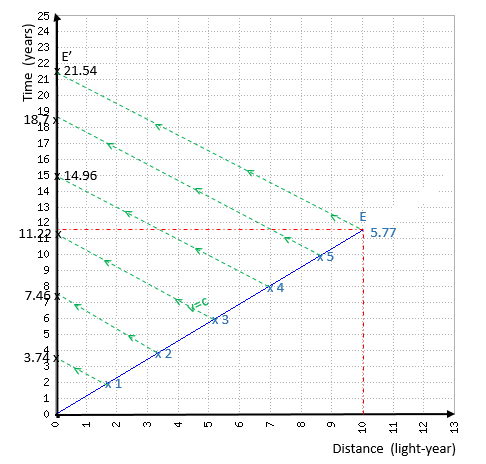 T reaches planet Earth after a 5.77 years long travel (exactly the symetric from the outbound = blue line in the diagram below) 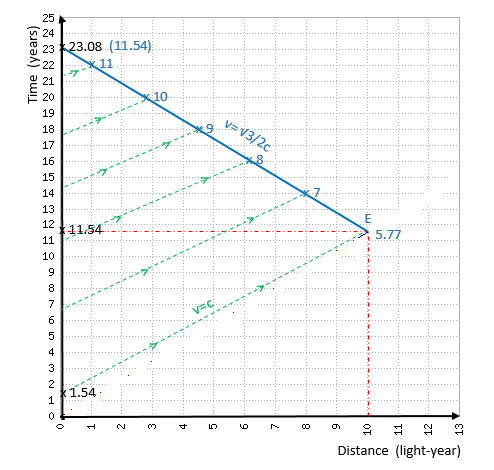 What does the twin S on Earth measure 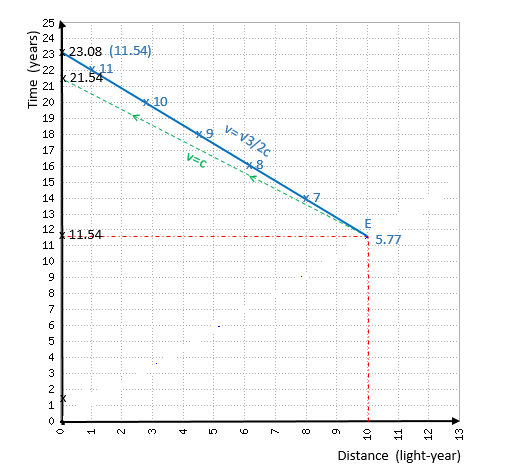 So to put it in a nutshell, when the twins T and S meet each other again on Earth, S's clock has ticked 23.08 years whereas T's clock has only ticked 11.54 years.

To put it in other words,  when T lands on Earth after his space travel, it turns out that he is γ times younger than his sedentary twin, and the time dilation symmetry is broken. The T's proper time is shorter than the one of S.

Why the situations are no more symmetrical

During the outbound travel, we have seen that the situations stay symmetrical for both twins because the two inertial referentials T and S are in uniform constant motion at velocity v relative to ech other.

In the same way, during the way back, T and S's respective inertial refentials are in uniform motion with velocity -v relative to each other.

But if we consider the travel as a whole, the paths are no more symmetric because T has changed from inertial referential in E (or in other words he has had to accelerate).