In our previous articles, we have seen that the time dilation factor, also known as the Lorentz factor γ, becomes measurably larger than 1 only for objects or referentials that can move close to the speed of light.

Ideally, we would like to find an object with a given lifetime and we could then look to see if we could prolonge his lifetime simply by moving it fast.

The muon particle[1] meets these requirements as it has a very short lifetime: it decays via the weak interaction into an electron and in another pair of subatomic particles called neutrinos after 2.2 microseconds. Also, because this particule is very small, it very easy to be accelerated to very high speeds.

In the late 1990s, scientists at Brookhaven National Laboratory on Long Island, New York, used the Alternative Gradient Synchrotron (AGS) to produce beams of muons circulating around a 14-meter-diameter ring at a speed of 99.94 percent of the speed of light.

If muons live for only 2.2 microseconds at this speed, then they would manage no more than 15 laps of the ring before they died.

In reality they managed around 433 laps, which means their lifetime extended by a factor of 28.8 to just over 60 microseconds.

If Einstein is right and the special theory of relativity holds true, we should find the same value by calculating the Lorentz factor given a speed of 99.94 percent the speed of light

So Einstein's prediction was right: special relativity theory's prediction was that the accelerated muon should live 29 times longer than a muon standing still, and this is exactly what was observed by the scientists at Brookhaven!

That is a great result but we still should take a moment to clarify a point: how many times would we travel around the ring if we could speed around the ring with the muons?

As we are standing still relative to the muon and the muon lives for 2.2 milliseconds in its own rest referential (that's the muon's Proper time), our watch would also measure a 2.2 milliseconds time interval. Nevertheless, we would still manage to make 433 laps of the ring. How is it possible?

That's because of the second effect of special relativity, the length reduction in the direction of the movement, as seen in The Lorentz transformations Part III - Measuring-Rods and Clocks in motion. From the muon's perspective, the ring is travelling at speed 99.94 percent speed of light and therefore its length should shrink from the same factor γ. So in the muon's rest referential, we are flying more than 400 times around a 14/29m = 0.5m only! There is no contradiction!

Below is a space diagram which shows the length contraction from one referentiel relative to another: if we suppose that in our context, the referential R' is attached to the Earth, and the muon's referential is R, we can see that the length in R is shrinked.

To visualise the time dilation effect, draw a tangent (dotted black line) to the space hyperbola at the point where the object's spatial axis (x') crosses the hyperbola. This line is parallel to the ct' axis and therefore has a constant value of x'=1. The distance from the origin to where this tangent crosses the observer's spatial axis (x) is equal to the spatial contraction. From the point of view of the observer in R or from muon's perspective in our case, the ring of length 1 has contracted to length < 1

Remark: on the diagram, the ring is shrinked to roughly 0.8 to make the ring still visible but in reality, it should be shrinked  to 1/29 = 0.0345. Recalling from our last article The Lorentz transformations Part V - 2nd observer in Minkowski spacetime diagram, the x'-muon axis should be much closer to the 45° light worldline, as we should have tan θ = (v/c) = 0.9994 so θ = 44.98°, which will make the tangent line much more steeper. 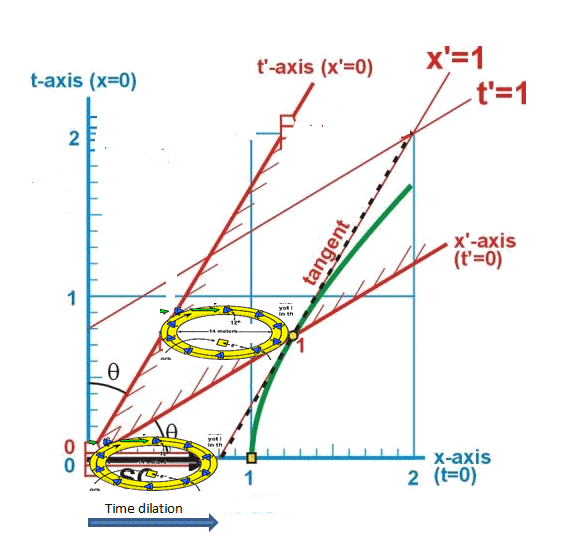 [1]The muon is an elementary particle similar to the electron, whith electric charge of -1 and a spin of 1/2, but with a much greater mass. It is classified as a lepton, along with the electron, the tau and the three neutrinos.