However, we did not really explain how to show the second inertial frame Ranja belonging to a second observer O'. How do we draw the ct' and x' axis relative to Ranja referential?

Each possible event that can happen in frame Ranja when the spatial coordinate x' equals zero, joined together, will form the ct' axis. So we just have to consider the point x'=0 : this point is moving along the x axis with a velocity v (as the frame Ranja is moving at this velocity)

But we could have found this equation directly using the Lorentz transformations:

Similarly, if we want to find the equation of the x' axis, which is the line where ct'=0, we deduce from Lorentz transformation applied to ct' transformation:

The angles  between ct' and ct and x' and x are equal and are defined as tan θ = v/c. 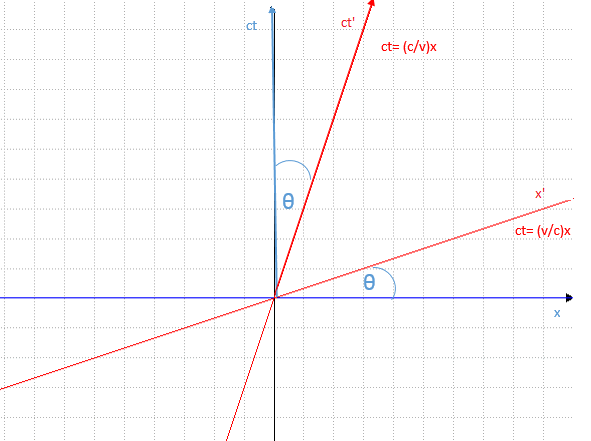