You can find all the java technical details and how to run this program at this adress: https://github.com/cyrilondon/quantum-mechanics-java/tree/master/teleportation

As a reminder, that is how our teleportation quantum circuit looks like:

If you have read carefully our previous article, you will notice that we have placed an initial gate P auli-X before the teleportation circuit, so that the qubit to be teleported, at the left of the top ligne is in the |1> state (X|0> = 1).

So once our program run, the expected result should be for Bob (bottom line of the circuit) to get a |1> qubit.

Let's go through our circuit step by step:

First we initialize our quantum simulator (yes we still don't have a personal quantum computer.. ;), and start with 3 qubits all in initial state |0>. Keep in mind that in Strange API each qubit will be indexed respectively at postion 0,1 and 2.

Than we switch our first qubit (top line, index=0), the one to be teleported to |1> by applying the Pauli-X gate

So far, we have covered this part of the diagram 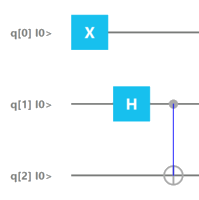 Let's go on by applying the last two gates before the measurement. 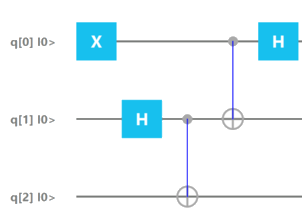 It's now time to measure the qubit[0] and qubit[1]

We are done with the quantum teleportation algorithm itself. We just have to run the algorithm now and to check that Bob's qubit will be in the |1> state, which in this case maps to the measure of the bit 1.

To make sure that we have enough confidence in our algorithm, we display the statistical results of 1000 simulated executions of our quantum teleportation 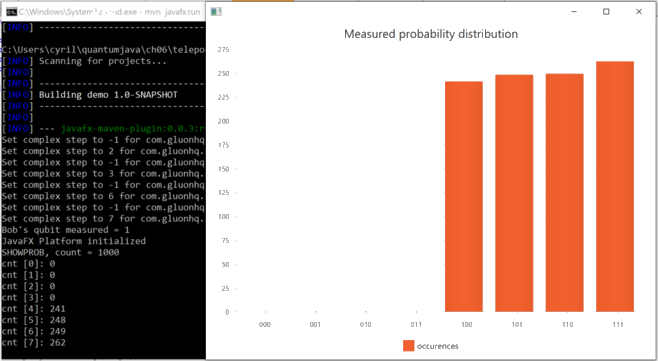 - about 250 runs that have the outcome 100, which means qB was measured 1 and both qA and q were measured 0

Note that in all those cases  qB is measured 1. The other qubits can hold either  0 or 1, but  qB is always 1.

These results seem to confirm that the algorihm we have programmed is indeed teleporting a qubit from Alice to Bob.

Teleportation of a superposition

Actually, we have just showed that the algorithm is working when the initial qubit is in |1> state, but can we do the same if the qubit is on a superposition?

This actually possible with Strange API: instead of applying a gate, you can just initialize the qubit in the α|0> + β|1> superposition state with some specific values for α and β.

For example, adding the following line of code just before our program is run

If we run the modified program, we see the following output: 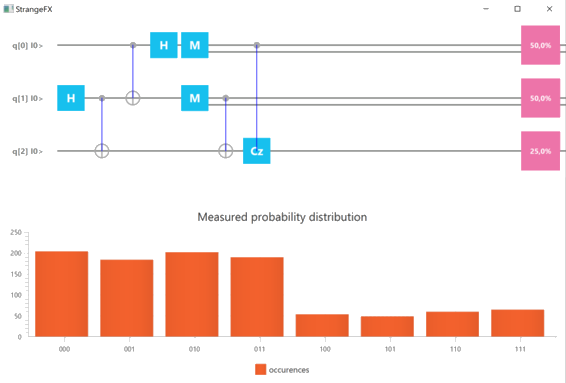 From the top half of the output, we see that there is now a probability of 25% that Bob’s qubit will now be measured as 1.

The bottom part of the figure shows a similar result: Bob's qubit measured as 1 corresponds to the last four combinations 100,101,110 and 111 and sum up roughly to 250.

This is exactly what we hoped for!