Quantum Teleportation, probably because its name, is the new buzz word in the world of quantum science nowadays. We get breakthrough news almost every week on this topic.

In August 2019, Austrian and Chinese scientists announced that they have succeeded in teleporting three-dimensional quantum states (qutrits) for the first time[1].

But what do we mean exactly by teleportation? Our aim in this article is to give a gentle introduction to the teleportation topic, and more precisley at the end of this reading, you should be able to understand and implement the teleportation quantum circuit:

Don't worry about its apparent complexity, we have encountered each and every component of this circuit in our previous articles!

The problem that quantum teleportation looks to solve is as follows:  Alice has an unknown qubit |ψ⟩ that she wants to send to Bob. How can she do this?

It’s interesting to note that this is non-trivial in quantum information science, whereas in classical information theory there is no problem at all.

Rather, in a classical world:

- the low-level network drivers of the operating system read the value  of the byte at the value specific memory location, 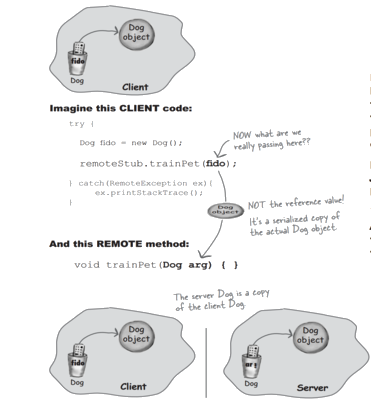 Unfortunately, we can NOT do this with a qubit.

- first because when we make a measurement, we disturb the state of the system according to the fundamental measurement postulate of quantum mechanics: the entire superposition of states collapses to a single term[2]. Hence, by doing so, not only we destroy the original qubit, but we also don’t have enough information to create a new qubit. with the same value.

- and qubits can not easily be transfered over long distances[3].

Why don’t we just make a copy of it, without measuring it? Well, unfortunately this is what the no-cloning theorem forbids, as easily demonstrated in our article The No-cloning theorem.

Fortunately, there is still a way for Alice to send her unknown qubit to Bob via the interesting result of quantum teleportation.

We assume that the first qubit (the top qubit in the diagram and q[0] in the below diagram) belongs to Alice and starts out in any |ψ⟩ state, since this is what the quantum teleportation algorithm assumes.

The second qubit (q[1] in the below diagram) belongs to Alice as well.

The first thing to do is to share an entangled state between Alice and Bob by  doing a Hadamard on the Alice's one and then performing a controlled not gate on Bob"s qubit.

To see that this circuit indeed creates an EPR pair, note that we start out with both qubits in the |00> state. 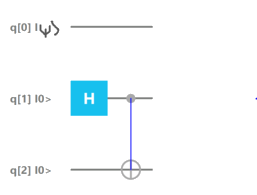 We then have to perform a Hadamard gate on the first qubit and do nothing on the second qubit. Thus, theoverall multi-qubit gate that we perform is H ⊗ I, as we saw previously in this article.

This is almost an EPR pair. To make it exactly an EPR pair, as we know we have to  perform a CNOT, controlling on the first qubit. Doing so yields

We now have Alice and Bob sharing an EPR pair.

The next step is to have Alice perform a CNOT gate between her qubit |φ> and her half of the entangled pair. 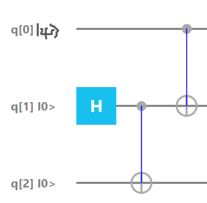 If we express |φ> in terms of the computational basis states |φ> = α |0> + β |1> with (α,β) complex numbers, we get four terms describing the whole state

This expression enables us to easily perform a CNOT gate between the first and second qubits.  Doing so by flipping the second qubit only if the first qubit is |1>, we obtain the state

We now have to perform a Hadamard gate on the first qubit: 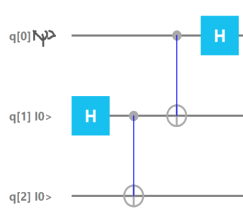 We recall that by applying the Hadamard gate to the basis states, we get:

We are done with all the gate operations we have to do before the measurement.

Note that after the measurement, we have classical information, which we represent in circuit diagrams with two lines (instead of one line for qubits)

To get a better idea of the possible outcomes Alice can get when she will measure, we can group terms containing the same state for the first two terms.
There are four possibilities for the first two qubits, namely |00>,|01>,|10>, and|11>.  Grouping these terms together, we can rewrite the state

Thus, in all four measurement cases, Bob is able to obtain exactly Alice’s unknown qubit |ψ> without either knowing what the actual state is.
For summarize, we enumerate all measurement possibilities in the table below.

That's it! We have teleported our first qubit ;-)

Important final remark: Note that there must be some form of classical communication between Alice and Bob after Alice makes measurements and before Bob performs operations.
If Alice measures 00, she has to tell Bob “I measured 00” at which point Bob knows to do nothing. Similarly for the other three possibilities.
Without this communication, Bob would have no idea what to do.
In this sense, it is important to emphasize that no  information,  classical or quantum, is really being “teleported” here, despite the name of the algorithm.
Alice’s classical “communication” is of course limited by the speed of light, and Einstein's special relativity (which postulates that nothing can go faster than light), is not violated!

[2] More formally, performing an observation irreversibly collapses the system into some eigenstate of an observable, corrupting the information contained in the qubit(s).

[3]The longer a photon travels over an optical fiber cable, the more likely errors will occur. At present, the maximum distance that can be covered is in the range of 100 km