In this article, we will write a our first quantum program to bring two qubits in entanglement state.

You can find all the java technical details and how to run this program at this adress: https://github.com/cyrilondon/quantum-mechanics-java

We know from our previous article C-NOT gate, Bell State and Entanglement that in this purpose we have to prepare a two-qubit system by example in |11> state, and then

We obtain then the |β11> entangled Bell state.

For this purpose, we will use the Strange java API, a Quantum Computing API for Java[1] which can be found here https://github.com/gluonhq/strange.

To get an first insight of the library, we can look at the code example given as introduction to the API in the Readme section.

That's a very good example in our case, because it implements the first step to build the entangled Bell state |β11> as exposed in our previous article C-NOT gate, Bell State and Entanglement

Looking at the last line of code 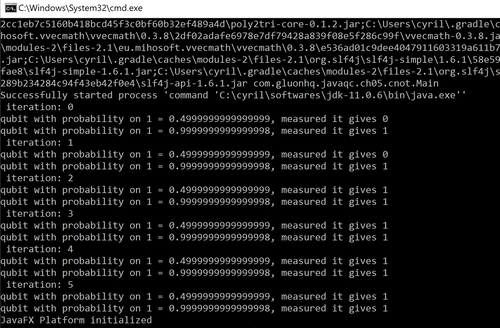 When the program is run, on each iteration, we get the probability displayed for each qubit to be in the |1> state. As expected:

Just add the required import on the beginning of your program, and one line of code at the end

and you will be able to visualize your quantum circuit and the corresponding output probabilities for each qubit:

We are just half way to our entanglement state. As we know, we still have to apply the C-NOT gate to the precedent two-qubit state.

With some formula, it translates to:

The corresponding quantum circuit is shown below: 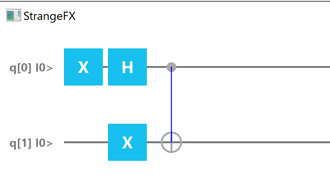 So how can we achieve this via Strange API? Nothing is simpler. We just need to add an another step to our program, which includes the C-NOT gate. This is literally done in two lines

The C-NOT gate takes as parameters the index of our two qubits added initially to our program via the instruction Program p = new Program(2); 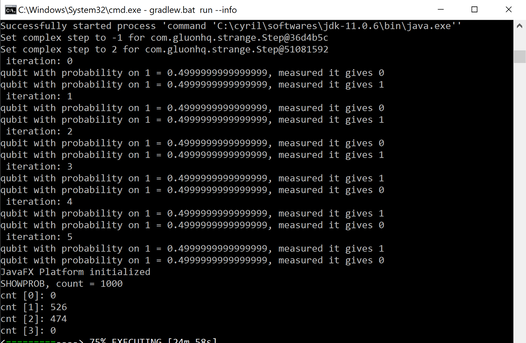 But still this graphic does not show the main interest of this quantum circuit, i.e its entangled nature: we never observe the two-qubit states |00> or |11>.

- To illustrate this fundamental feature, we use the last instruction line Renderer.showProbabilities(p, 1000) which gives the probabilities of the final measured states over 1000 runs: in our case, we measure 526 times |01> and 474 times |10>, but we get a zero probability for both |00> and |11> states. 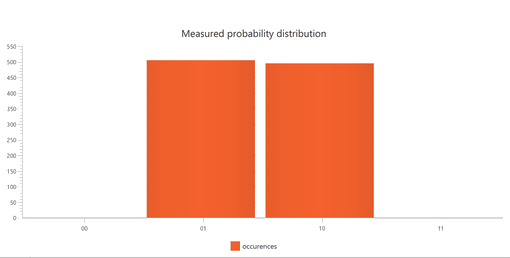 [1] I have chosen Strange API first because i am a Java developer, and secondly because it offers a nice graphical API.