Quantum computers are built on top of single-qubit and 2-qubit operators. In the last two articles, we covered few single-qubit gates, and especially the Hadamard gate which puts a qubit into superposition.

Here, we will explore the 2-qubit operators and more precisely we will  look at putting qubits into entanglement with the C-NOT gate.

The Controlled-Not gate (CNOT) is analogous to the XOR gate (Exclusive OR) in classical computing. We have already presented in our previous article Introduction to quantum logic gates the XOR gate table truth: it gives a true (1 or HIGH) output when the number of true inputs is odd. 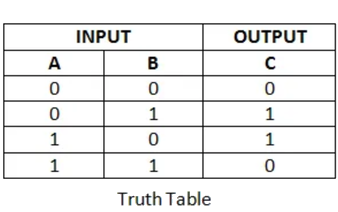 Below is a snapshot of both classical and quantum diagrams. We verify easily that they mirror each other: the quantum Target output column matches the y+x column of the classical XOR gate. 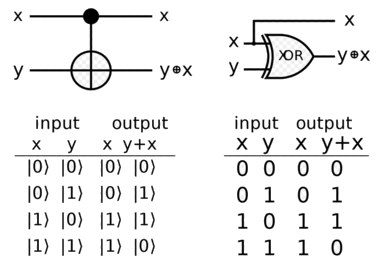 As we already know, each gate/operator can be expressed as a matrix. As the C-NOT gate takes two qubits as inputs and two qubits as output it will be a 4x4 matrix.

There is a useful technique to transform a truth table to a matrix. starting at row 0 column 0, you label the columns and rows consecutively in binary, from 00 to 11 for example. You then place a 1 in a cell if the input maps to the output; 0 otherwise.

That's it, you're left with a matrix for your gate.

Let's try to apply the CNOT-gate by example to the |00> state, by multiplying the CNOT matrix to the basis state vector

We observe that it is the expected result ;-)

Remark 2: The first experimental realization of a CNOT gate was accomplished in 1995 with a single Beryllium ion.

Let's try now to prepare a two-qubit system by example in |00> state, and then: 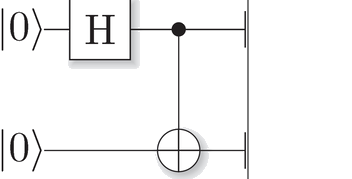 In the first step, the Hadamard gate transforms |00> in the superposition state (H|0>)|0> as per below:

In the first line, we used linearity, and in the second line we used the definition of the CNOT gate.

Remark 1: we remind here what this entanglement means: the qubit held by Alice (subscript "A") can be 0 as well as 1. If Alice measured her qubit in the standard basis, the outcome would be perfectly random, either possibility 0 or 1 having probability 1/2. But if Bob (subscript "B") then measured his qubit, the outcome would be the same as the one Alice got. So, if Bob measured, he would also get a random outcome on first sight, but if Alice and Bob communicated, they would find out that, although their outcomes seemed random, they are perfectly correlated.

Let's detail the creation of the three remaining Bell states

Applying the CNOT gate to this state gives:

Finally below are the different ways to create different Bell states: