It can be shown that the covariant derivatives of higher rank tensors are constructed from the following building blocks: 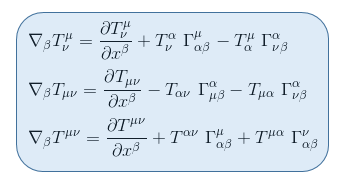 And substituting gij in the second above equality dedicated to type (0,2) tensor gives

As all the terms gij are constant, the first term δgij/δxβ is null. And because there is no curvature in the Euclidean space, all the Christoffel symbols vanish, so that the conplete right-hand side of the equation equals zero, and therefore

But this is the magic and clever thing about tensors, if this equation holds true in a particular coordinates system, here the Cartesian coordinates, it must be true for the Euclidean metric in ALL coordinate systems.

Covariant derivation of the Euclidean metric in spherical coordinates

Let's try to verify this by calculating one component of the covariant differentiation in the spherical coordinates.

We recall from our article that in spherical coordinates, the metric's expression is

If we were to calculate the component gΦΦ;θ, we should then write

But gαφ !=0 only if α = φ, based on the above expression, so we can simplify this equation

Finally, we confirm that this component of the covariant derivative with respect to θ equals also zero in a polar coordinates system, as expected