In our last article Local Flatness or Local Inertial Frames and SpaceTime curvature, we have introduced the concept of Riemann tensor, saying that the importance of this tensor stems from the fact that non-zero components are the hallmark of the spacetime curvature.

But before to delve into more details and to give a complete formulation of the most important tensor in General Relativity, it seems reasonnable to get a better understanding of the tensor's concept itself.

Let us start by giving a definition first:

So we will have to think of tensors as objects  with components that transform between coordinate systems in specific and predictable ways[2].

Corollary 1: Combined with the principle of General Covariance, which extends the Principle of Relativity [3] to say that the form of the laws of physical should be the same in all - inertial and accelerating frames, it means that if we have a valid tensor equation that is true in special relativity (in an inertial frame), this equation will remain valid in general relativity (in a accelerating frame)

As your study carry you along the path of general relativity, you will without doubt run accross the discussions of "covariant" and "contravariant" tensor components.

A good place to begin is to consider a vector, which is nothing else thant a tensor of rank one, and to consider this question:"What happens to a vector when you change the coordinate system in which you're representing this vector?" The quick answer is that nothing at all happens to the vector itself, but the vector's components may be different in the new coordinate system.

One should first recall as preliminary the two following things about vector in space-time, even if it does not really impact the below study on vector components under vector rotation:

- in spacetime vectors are four-dimensional, and are often referred to as four-vectors.

- Secondly, the most important thing to emphasize is that each vector is located at a given point in spacetime. More specifically, to each point p in spacetime, we associate the set of all possible vectors located at that point, and this set is known as the tangent space at p, or Tp. 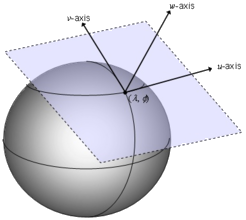 Nevertheless, it is  often useful to decompose vectors into components with respect to some set of basis vectors. Then any vector A can be written as a linear combination of basis vectors

The coefficients Aμ are the components of the vector A in the e(μ) basis.

We have by definition

with Λν'μ equates the components transformation matrix from μ to ν' coordinate systems.

But by definition of a vector (rank-1 tensor) this relation must hold no matter what the numerical values of the components Vμ are.

We can therefore say:

To get the new basis e(ν') in terms of the old one e(μ), we should mutliply by the inverse of matrix transformation Λν'μ

Therefore the set of basis vectors transforms via the inverse transformation of the coordinates or vector components.

This may look quite abstract thus we should switch to more visual/geometrical explanations of this remarkable result.

Let us consider the simple rotation of the two-dimensional Cartesian coordinate system shown below. In this transformation, the location of the origin has not changed, but both the x- and y- axis have been tilted counter-clockwise by an angle of θ. The rotated axes are labeled x' and y' and are drawn using red color to distinguish them from the original axes. 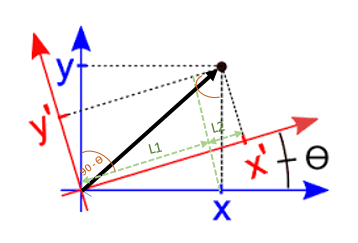 If you think to the changes to components Ax and Ay of the vector A, you might come to realize that the vector component A'x in the rotated coordinate system can not depend entirely on the component Ax in the original system. Actually, as you can see in the figure above, A'x can be considered to be made up of two segments, labeled L1 and L2.

You can see that Ax is the hypothenuse of a right triangle formed by drawing a perpendicular from the end of Ax to the x'-axis. Then it is easy to see that the length of L1 (the projection of Ax onto the x'-axis) is Ax cos θ.

To find the length of L2, consider the right triangle formed by sliding A'x upward along the y'- axis and then drawing a perpendicular from the tip of A'x to the x-axis. From this triangle, we should be able to see that

A similar anaylis for A'y, the y-component of vector A in the rotated coordinate systems, gives:

The relationship between the components of the vector in the rotated and non-rotated systems is conveniently expressed using matrix notation as:

It is very important to understand that the above  transformation equation does not rotate or change the initial vector in any way; it determines the values of the components of the vector in the new coordinate system. More specifically, the new components are weighted linear combinations of the original components.

As a final simplification, we can use the Einstein index notation by writing the equation as follows: 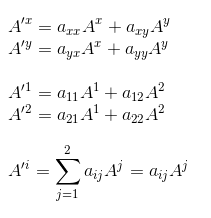 So in our example, we could write the transformation matrix aij as follows:

Let us try now to figure out how a basis vector transform from the non primed to the primed coordinate when the original basis vector is rotated through angle Θ. We have to be very careful on the meaning of transformation when referring to basis-vector:  we are not looking at how the components of the same vector transform from an original to a new coordinate system (above example of aij transformation matrix), but how to find the components of the new (rotated) vector in the original/same coordinate system.

We could show easily through geometric constructions such as those shown precedently that the components A'x and A'y of the new rotated vector (A') in the original coordinate system are:

For any coordinate system in which a linear relationship exists between differential length elements ds, writing the equations which transform between the system is quite straightforward.

If you call the differentials of one coordinate system dx, dy and dz and the other coordinate sytem dx', dy', and dz' the transformation equations from the unprimed to the primed system comes directly from the rules of partial differentiation:

which once again, using the Einstein summation convention could be written as:

And it can be easily shown that those coordinates transform inversely to how the bases covariate.

As an example, let us consider the changement of coordinates from polar (r, θ) to two-dimensional cartesian coordiantes (x,y):

The componentsfrom old to new system transform according to the following matrix:

In Cartesian coordinate system as the one used previously, there is no ambiguity when you consider the process of projection of a vector onto a coordinate axis.

In the diagram below, to understand parallel projections, we have to consider the basis vectors e1 and e2 pointing along the non orthogonal coordinate axes and the projections X1 and X2 of the X vector onto those directions. 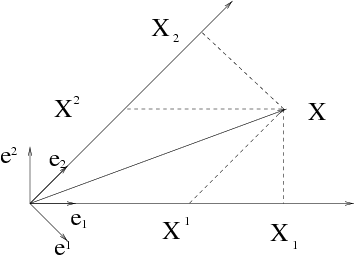 In this case, vector X may be written as:

where as seen above, X1 and X2 represent the parallel-projection (contravariant) components of vector X.

Now if we project vector X in a orthogal way along the axes, we come up with the X1 and X2 components of the vector. First remark to do is that the "parallel" projections and the "orthogonal" projections don't have quite the same length and that obviously using the rules of vector addition with X1 and X2 don't form vector X. The perpendicular projections simply don't add up as vectors to give the original vector.

It's then reasonable to wonder if there are alternative basis vectors than e1 and e2 that would allow the perpendicular-projection components to form a vector in a manner analoguous to the contravariant components.

There are, and those alternative basis vectors are called "reciprocal" or "dual" basis vectors. These have two defining characteristics:

We use superscript notation to denote the dual basis vectors as the inverse tranformation matrix has to be used when these basis vectors are transformed to a new coordinate system, as it is for the contravariant vector components X1 and X2.

where the dx'i/dxj terms represent the components in the new coordinate sytem of the basis vector tangent to the original axes.

where the dxj/dx'i terms represent the components in the new coordinate sytem of the (dual) basis vector perpendicular to the original axes.

[1] Defintion given by Daniel Fleisch in his Student's Guide to Vectors and Tensors - Chapter 5 - Higher rank tensors p.134

[2] In more formal mathematical terms, a transformation of the variables of a tensor changes the tensor into another whose components are linear homogeneous functions of the components of the original tensor (reference MathWorld article Homogeneous Function).

[3] We recall that according to the Principle of Relativity, laws of physics are the same in any inertial frame of reference.

[4] We will see in the next part of the article why we are superscript index notation for the 'x' and 'y' there; just let us say for now that is because they represent the contravariant components of the vector and this is for distinguishing them from the covariant components Ax and Ay.

Let us try to illustrate this by the tensor that we have used extensively so far, at least since our article Generalisation of the metric tensor in pseudo-Riemannian manifold, i.e the metric tensor.

If we now try to express this metric tensor components g'μν in an another arbitrary referential R' with coordinate x'μ, we get:

One of the very useful functions of the metric tensor is to convert between the covariant and contravariant components of the other tensors.

If you wish to convert from a covariant index to a contravariant index, you can use the inverse gij (which is just gij) to perform operations like

This is the consequence of a more general mecanism called contraction, by which a tensor can have its rank lowered by multiplying it by another tensor with an equal index in the opposite position, ie by summing over the two indices. In this example, the upper and lower α indices are summed over: