In many applications, it is important to know how a vector fiels changes as we move from one location to another.

If we now are asked to find the rate of change of the air with respect to the (x, y, z) coordinates system, we could easily take the partial derivates of V:

Here we don't need to worry about differentiating the basis vectors êx, êy, êz because they are constant, each is one unit long and pointing along the x, y, z axis respectively.

But here is the crux of the problem: in most of the coordinate systems (the exception being when we are using Cartesian coordinates in the Minkowski space of special relativity), because the basis vectors point in different directions as wemove aroud the space, we must also consider the derivatives of the basis vectors.

So if we consider a vector V = Vαeα , the exact derivative should give us: 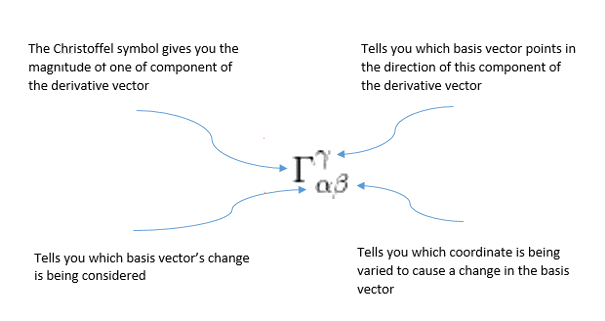 Finally, the Christoffel symbols have the following characteristics:

- they are symmetric on the lower indexes, i.e Γγαβ = Γγβα (that's evident from the above definition) [1]

- at each point of a N-dimensional spacetime, as each of the three indices (lower and upper) can take N values,  N x N x N Christoffel symbols will be defined.

- in a four-dimensionnal coordinate system, 4x4x4 = 64 different  Christoffel symbols should theoretically been defined, but because of the lower indices symmetry, and as there are only 10 different ways to arrange 4 coordinates if the permutations are equivalent - nx(n+1)/2- , we finally get only  4x10 = 40 distinct values.