It should be clear that General Relativity describes gravitation in terms of curvature of spacetime and reduces to Special Theory of Relativity for Local Inertial Frame (LIF). However, it is important to explicitly check that the description reduces to the Newtonian treatment when we select the correct boundary conditions.

These conditions, referred to as the Newtonian limit, are applicable to physical systems exhibiting:

Mathematically, this leads to the following approximations:

So far, we have used the Newtonian limit approximation in two use cases:

Newton gravity as the curvature of the time

Now it is time to raise an interesting question: what could be a curved spacetime picture for Newtonian gravitation? Put it in other words, how do we reconcile the parabolic movement of projectiles as observed on Earth (weak gravitational field) with Einstein's spacetime curvature vision?

Obviously, the common experience teach us that two objects animated with distinct speeds, as a bullet from a gun and a ball, do not follow a straight line in presence of a gravitational field. Seen in a laboratory, the two trajectories have different curvature[1].

To be able to shed some light on this point, we have to recall from our article Gravitational redshift or Einstein effect - Part I that spacetime curvature in general causes the time coordinate t to differ from the proper time τ.

This gives the interval in proper time dτ that corresponds to an interval dt in coordinate time for a stationary observer in the vicinity of a massive object, in a region with gravitational potential Φ.  Since Φ is negative, this proper time interval is shorter than the corresponding interval  for  a  stationary  observer  at  large  distance  to  the  object,  where  Φ→0  and  thus dτ=dt

The spacetime interval is then given by:

where M is the mass of the Earth or any star, whose gravity we represent by this curved spacetime, and where r2 = x2+y2+z2 is the distance from the star to the point (x,y,z) where the clock is.

The time part of the spacetime interval is therefore determined by the gravitational redshift effect and the motion of any object acted on by a Newtonian gravitational force can be fully described instead as a free motion along a geodesic of a geometry with curved time. The curvature here is only in time direction.

If we now redraw the trajectories in a full spacetime diagram, taking in consideration the time component 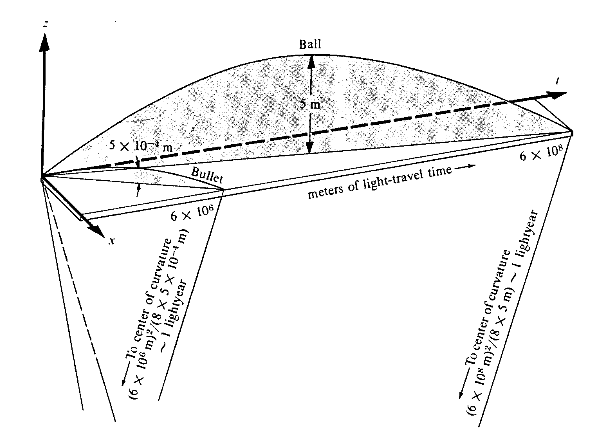 Then by approximating the radius of the spacetime trajectory as R = d2/8h with d the horizontal distance expressed as meters of light-travel time to the target point and h as the maximum height ,we realize that the curvature of spacetime (around one lightyear, the famous c2/g) is the same for the bullet and the ball, and their respective orbit are completely straight: they are geodesics.
And we can conclude this paragraph that perhaps in counter-intuitive way, it is easier to study gravity in spacetime than in space and time separately as in spacetime the curvature does not depend on the initial conditions!

[1] The space trajectory is a parabola and can have any amount of "squashing" depending on how the mass is originally thrown.