In this article, we will expose an apparent paradox related to two twins, but without considering any frame acceleration (this so called 'twin paradox' will be discussed in the next article in part 2).

The apparent paradox is the following:  if two persons are born at the same time in a given 'rest' referential R but with one of the person moving with uniform velocity v, as both referentials R (rest referential) and R' (moving referential attached to the second person) dilate the time one relative to each other, how different will be the twins' ageing process in each referential?

Here we consider two persons born at the same time t=0  in the same referentiel, but one of the person P'  is born in a rocket animated with a uniform movement with velocity v relative to the rest frame (considered to be the Earth), whereas the other one P is born on Earth, say along the x-absciss at the point B with coordinates (0,L), and stay immobile there, watching rockets flying  in the space for the rest of his life.

We take the hypothesis that the relative velocity is given so that Lorentz factor = γ = 2.

If we were to draw the spacetime diagrams of these two people P and P', we should then recall from our previous article The Lorentz transformations Part V - 2nd observer in Minkowski spacetime diagram that if an object has a velocity v defined as

And withour any calculus, we can draw the word line of the second person P staying immobile at the surface of the Earth as a  verticale line with absciss x = L (red line)

The green line, with equation ct = x, is the light wordline. 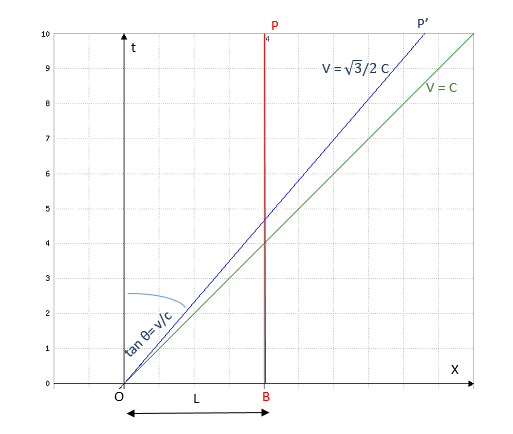 We are now interested into the moment when observer P sees P' in the sky above him.

Suppose that at this moment, that's the 20th birthday of P in referentiel R. How old would be P' in the same Earth referential, i.e how many candles would P see through the rocket window  as P' is celebrating his own birthday?

As we know, the time of a moving referential relative to another one considered to be 'at rest' is dilated by the  factor γ so in this case it is slowed down by a factor = 2. So 20 years old P is seeing a 10 old years child in the rocket, even if they are born the same day (t=0) in the same referential R.

As an exercice, we can try to visualize graphically this time dilation factor.

We have already given an insight of the method in the previous article Minkowski's Four-Dimensional Space-Time (tab Time dilation visualization) but let's explain it again here.

We know the equation on which all pairs of events with a given interval lie: ds2 = c2t2 - x2.

If we choose the unit time interval, we get the equation of an hyperbola 1 = c2t2 - x2, whith by convention c=1 gives

We also have to remember that the blue wordline of P' in R referential is at the same time the ct' axis in the R' referential (x'=0).

Then the hyperbola can be used to calibrate one axis (ct) with respect to the other (ct'). In the diagram, the hyperbola intersects the time axis of the various observers/referentials, and marks off the points at which each observer measures his local time variable to be 1.

The horizontal dotted blue line (ct=2) passing through events A and B is a line of simultaneity for observer P in R, meaning all events on that line have the same time value of ct = 2. 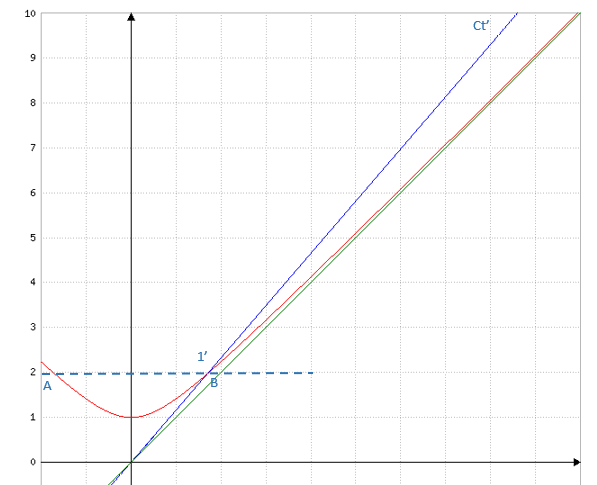 Also we could try to find calculate the distance L at which the worldlines of P and P' do cross in R referential.

We find L = βtc, and by expressing  L distance in light-year,we find that L = 20β - as we know by hypothesis that P sees P' passing by when he celebrates his 20 years.

So far, we have seen that in referential R, person P aged of 20 years old will see the 10 years old person P' passing by in the rocket.

We should now consider this event in referential R' and make sure that from this perspective, we still have the same situation, i.e a 10 years old person P' seeing a 20 years old person P looking at him through the rocket window.

First, let's try to determine the coordinates of P birth (point B with coordinates x=L, t=0 in R), this time in R' referential.

Applying the Lorentz transformation, we get:

But we also know that when person P' sees person P through his window, he is 10 years old.

The physical ageing of both observers is coherent from both perspective R and R'.

We get the t'b coordinate of the birth of person B (point B) by drawing the parallel of x' axis through B (red dash line): we can check that this line crosses the ct' time axis at the coordinate ct=-60 in R, which means at ct'=-30 in R' (we have shown this in the paragraph above).

Also the T'm coordinate of the meeting point M has coordinatect=20 or  ct'=10. 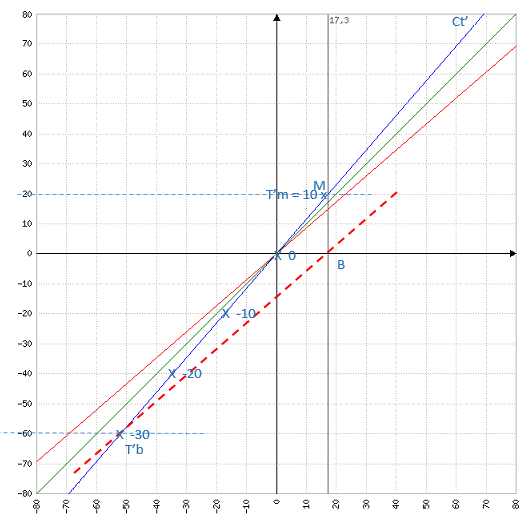