Previously, we have exposed the The Deutsch-Jozsa algorithm, one of the first example of an algorithm exponentially faster (1 evaluation) than any possible deterministic classical algorithm (2n-1+1 evaluations). It was a great finding, but unfortunately, not of a practical great interest.

In this article, we would like to introduce another quantum algorithm, the so called Grover's algorithm, after the name of its founder, Lov Grover[1].

Compared to the Deutsch alfgorithm, Grover's algorithm belongs to a completely different class of algorithms represented by the quantum search algorithm. These provide a less striking but still remarkable quadratic speedup over the best possible classical algorithms.

Suppose you are given a large unstructured list of N items. Among these items there is one item with a unique property that we wish to locate; we will call this one the winner w.

To find the winner -- the marked item -- using classical computation, one would have to check on average N/2 of these boxes, and in the worst case, all N of them.
On a quantum computer, however, we can find the marked item in roughly √N steps with Grover's amplitude amplification trick.

The 'database' or unstructured list is comprised of all the possible computational basis states our qubits can be in. For example, if our list contains 4 items, the list is the states |00>, |01>, |10>, and |11>.  More generally, if the list is composed of 2N items, the list will contain the 2N states of N starting qubits.

The winner state w will be identified by a function f such as:

In our quantum circuit, this function will be implemented as an Oracle that add a negative phase to the solution state.

The quantum oracle related to a classical function f(x) does the following: for any value of |x> that is not the specific value w, f(x) is 0, hence the original value |x> will be returned.
In case the value w is passed through the Oracle, the result will be -|x> .

As an example, suppose we have a beforehand know winner value w = 3 in a list 4 items.

then the oracle's matrix will be a 4x4 diagonal matrix of the form:

To which state can we apply this oracle? Before looking at the list of items, we have no idea where the marked item is. Therefore, any guess of its location is as good as any other, which can be expressed in terms of a uniform superposition |s>

By aplying our oracle, we have rotated the winner's state of Π (1/2 -> -1/2) but we did not change at all the measurement probalities. If at this point we were to measure in the standard basis {|x⟩}, this superposition would collapse, according to the fifth quantum law, to any one of the basis states with the same probability of 1/N (1/4 in our case).
Our chances of guessing the right value w is therefore 1 in N, as could be expected. Hence, on average we would need to try about N times to guess the correct item, and this algorithm won't give us any advantage compared to a classical search.

That's why Grover's algorithm includes a procedure called amplitude amplification, which is how a quantum computer significantly enhances this probability. This procedure stretches out (amplifies) the amplitude of the marked item, which shrinks the other items' amplitude, so that measuring the final state will return the right item with near-certainty.

The Diffusion Operator does a so-called "inversion about the mean", which means the following: 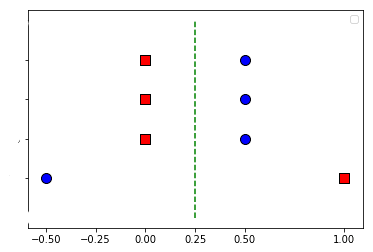 In the usual matrix representation, the result of the diffusion operator gives

That's exactly what we wanted. At the end of the algorithm, we are certain - with probability equals to one, to get the index corresponding to |11>, which is 3.

In case there are more than 2 qubits, the probability for measuring the correct answer is larger than the probability of measuring any of the other options, but it is not 100%. In that case, the quantum oracle and the diffusion operator have to be applied multiple times. It can be proven mathematically that the number of steps that provides the optimal result is the value closest to √N ∗ Π / 4.

We saw previously that the Oracle corresponding to the classical function shoud inverse the winner state as per below:

Let's try to justify thereafter why the sign is flipped.

is addition modulo 2. In other words, the oracle leaves the |x> qubit (index qubit) in its original state, and the |y> qubit (Oracle qubit) is replaced by the XOR operation between y and f(x).

We regard |x⟩ as flipped, thus the oracle qubit |y> is not changed, so by convention the oracle qubits are usually not mentioned in the specification of Grover's algorithm.

Thus the operation of the oracle is simply written as:

[1] Grover, Lov K. (1997). "A framework for fast quantum mechanical algorithms". https://arxiv.org/abs/quant-ph/9711043. Grover has been ranked as the 9th most prominent computer scientist from India.