In our previous article Gravitational redshift Part III - Experiments, we have mentionned the Pound–Rebka experiment, proposed in 1959 by Robert Pound and his graduate student Glen A. Rebka Jr, to test the gravitational redshift or Einstein effect, predicted as soon as 1907 in Einstein's paper On the relativity Principle and the conclusions drawn from it".

This experiment, as successfull as it was - the result confirmed that the predictions of general relativity were borne out at the 10% level, still had two limitations:

- it only tested gravitational time dilation

- it was not measured with macroscopic clocks

In October 1971, Hafele and Keating flew cesium beam atomic clocks[1] around the world twice on regularly scheduled commercial airline flights, once to the East and once to the West.

In the opening statement of the first of two papers on the subject, the authors refer to the debate surrounding the "twins paradox" and how an experiment with macroscopic clocks might provide an empirical resolution. 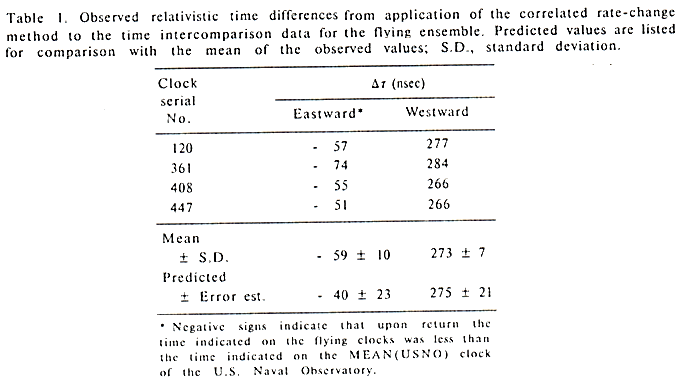 Let us see how to calculate these relativistic predictions.

Consequently, a plane will fly with the velocity RΩ+v (respectively RΩ-v) with respect to the ECI referential, R being the earth's radius at the equator and Ω the rotational speed of earth. We can use the Newton's addition of speed law there as we ignore the terms in higher order than v2/c2.

The ratio of the proper time interval (as mesured between two beats of the on-board clock) and the time interval as measured in ECI is then given by the usual Lorentz factor, as the consequence of the Transverse Doppler Effect

Therefore the relative shift of frequency between a flying clock and another one at rest in the ECI is given by:

In an analoguous way, we can deduce the relative shift frequency between a clock situated at the equator but this time at rest with respect to the Earth and another hypothetical clock at rest in the ECI referential as:

The shift of frequency between the flying clock and another one of reference at rest at the equator (with respect to the Earth) is then obtained by substraction of the two last terms:

Now it is unlikely that the flight happens exclusively along the equator, so the equatorial radius should be replaced by Rcosλ, λ being the latitude:

This kinematic relativistic effect is made of two terms:

As we know, General relativity predicts an additional effect, in which an increase in gravitational potential due to altitude speeds the clocks up.

which was giving a (negative) frequency shift when observed in a region of a weaker gravitational field; in our case, from Earth's perspective, the expression needs to be of opposite sign: on Earth's surface, the time slows down so the clock frequency speeds up and Δf/f>0.

So that the final expression of the shift between the Earth referential clock and the onbaord one becomes:

Remark 1: These theoretical results could be approached by using the following values:

Remark 2: In 1996 to commemorate th 25th anniversary of the Hafele and Keating experiment, NPL featured in a BBC horizon program that involved a flying single caesium flying clock from London to Washington and then back again. The predicted gain of 39.8ns for the flying clock compared very well with a measure of 39ns, providing once again a clear demonstration of relativistic effects.

[2] The inertial frame is fixed with its origin at the center of the earth. Its Cartesian axes remain fixed relative to the stars, and provide a reference frame for which the equations of motion are most simply expressed.