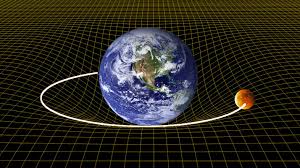 What is General Relativity?

It is the theory that Einstein developed starting from 1907 in order to incorporate the graviational field within the framework of special relativity, and that his author presented in its final version to the Prussian Academy of Science on 25th November 1915 in the paper The Field Equations of Gravitation.

Let us imagine an observer in free fall, measuring events in a small neighbourhood: according to the Principle of Equivalence, the gravity is cancelled out, the frame attached to this observer reduces locally to an inertial frame, and all the electromagnetic phenomena still obey the  laws of Special Relativity.

In this new context, gravity will not be seen as a 'force' exterted on a massive body, but rather in the differential gravitational acceleration of nearby local free falling inertial observers[2].

It turns out that this relative acceleration could be interpreted as the curvature of the spacetime, and so the final result of Einstein's general relativity is an equation known as Einstein's equation, which is able to quantify exactly how much warping there should be in the presence of matter and energy.

In his article from 1916 The Foundation of the Generalised Theory of Relativity, using approximate solutions of his equations, Einstein proposed three tests of general relativity which were not predicted by Newton's theory of gravity and were observable in the solar system[4]:

At this point of time,  these three predictions have been confirmed by experiments, and whenever the predictions of Einstein have been found to differ from the ideas of Newtonian mechanics, Nature has chosen Einstein's: space–time ceases to be an absolute, non-dynamical framework as envisaged by the Newtonian view, and instead becomes a dynamical structure that is deformed by the presence of mass-energy.

Therefore, a century after its inception, General Relativity has established itself as the standard theoretical description of gravity, with applications ranging from the Global Positioning System and the dynamics of the solar system, to the realm of galaxies and the primordial universe.

As stated in Gravitation (Misner, Thorne and Wheeler), "The Einstein equation is elegant and rich. No equation of physicscan be written more simply. And none contains such a treasure of applications and consequences (...) . The field equation governs the motion of the planets in the solar system; it governs the deflection of light by the sun; it governs the collapse of a star to form a black hole; it determines uniquely the external geometry of a black hole, it governs the evolution of spacetime singularities at the end point of collapse; it governs the expansion and recontraction of the universe. Amd more; much more".

[1] That is why Einstein applied the word General to this extension of his theory of relativity because this new theory would not be restricted to the non-accelerating reference frames of Special Relativity.

[3] These equations represent a set of Partial Differential Equations, where the object Gμν on the left hand side, called the Einstein tensor, is a mathematical object - a tensor - with 10 independant components, and where the object Tμν, called the energy-mementum tensor describes the source of this curvature.

- even though Einstein predicted the existence of gravitational waves from the equations of the General Relativity, he was convinced that they were too weak to be of physical significance and that they would never be discovered.
- Einstein himself did bot believe in the existence/reality of the black holes: he tried to demonstrate it in a article publisehd in1939 in the review Annals of Mathematic On a stationary system with spherical symmetry consisting of many gravitating Masses