Suppose that an observer is standing on the surface of Earth and is pointing a torch in the sky. A pair of events might be the successive peaks of the light wave leaving the torch.

From our article Generalisation of the metric tensor in pseudo-Riemannian manifold, we know that in the non inertial Earth's referential frame, the space time line element between the two events can be written as:

But as the observer is at rest in his own referential, the only non null coordinates is x0, so that the square of the line element can be simplified to:

If our observer is at rest in his own referential, we know also how to express the space time distance with respect to the proper time τ (tau), as explained in Proper time article

But we know from our previous article The Geodesic equation in the Newtonian Limit that at the surface of the Earth, the metric tensor can be expanded in terms of the gravitational potential as follows

In the above equation, the infinitesimal intervall dt can be considered as the time interval observed in a referential without gravitational effect, or say in another way in a ideal  referential situated at an infinite distance

We can therefore write:

This equation tells us that clocks run slower in a gravitationnal field as seen by a distant observer, this effect is known as gravitationnal time dilation.

As a direct consequence, because frequency is the reciprocal of the period, we can say:

We can think of the photons losing energy as they climb out of the gravitational field - loss of energy equating to drop in frequency.

Remark1: we can simplify the equation by replacing the quantity 2GM/rc2 by the Schwarzchild radius notation Rs

We can then write:

.If we suppose as it is the case on Earth that Rs<<ra (= Earth radius) and so that Rs<<rb,  the redshift can be approximated by a binomial expansion to become: 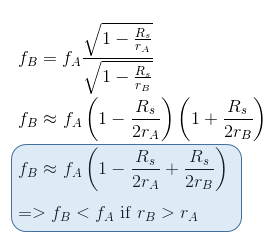