In 1907, two years of the appearance of his first paper on the theory of relativity, Einstein published in the then prestigious Jahrbuch der Radioaktivität und Elektronik an extensive survey article on the subject entitled On the relativity Principle and the conclusions drawn from it"[1].

In particular, in §V. Principle of Relativity and Gravitation section 17. Accelerated Reference System and Gravitational Field, Einstein assumes "the complete physical equivalence of a gravitational field and a corresponding acceleration of the reference system."

Thirteen years later, while exposing his special relativity to a general non-mathematician reader, Einstein will qualify this principle as "The happiest thought of my life"

Using this principle, Einstein predicted in the same article a local version of gravitational time dilation and gravitational redshift.

Also in §20 The effect on gravitation on electromagnetic phenomena of the same article, Einstein was able to predict the bending of light in presence of a gravitational field.

Remark 1: This equivalence will be named properly "Hypothesis of equivalence" for the first time in 1911 .

Remark 2: as in this article Einstein used the Special Relativity theory equations[2] and was not aware at this time of the spacetime curvature, the value of the light bending prediction was incorrect. 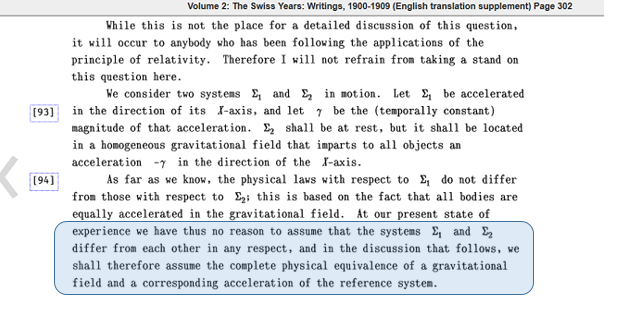