Once you have arithmetized a space with an arbitrary coordinate system, there is one tensor that allows you to define fundamental quantities such as lengths and time in a consistent manner, no matter which coordinate system you employ.

That tensor, the one that "provides the metric" for a given coordinate system in the space of interest, is called the metric tensor, and is represented by the lower-case letter g.

Three different definitions could be given for metric, depending of the level  - see Gravitation (Misner, Thorne and Wheeler), three levels of differential geometry p.199)

In the language of elementary geometry, metric is a kind of table giving the interval between every event and every other event.

In the language of abstract differential geometry,  metric is a type of bilinear machine which takes as input a pair of tangent vectors u and v at a point of a surface, and produces a real number scalar g(u,v). It can be seen as the generalization of the dot product in Euclidean space.

In the language of coordinates, given a basis eμ (e0,e1,e2,e3) in a tangent space Ε, the gμν components of the g matrix relative to this basis is given by

The metric tensor has the following properties:

To understand the role of the metric tensor, we have to consider the vector dr extending from one point to the other. Then the square of the differential length element ds2 may be written as:

The link between the abstract, bilinaear machine viewpoint and the concrete coordinates viewpoint is readily expressed as per below:

where gμν represents the covariant components of the metric tensor.

Alternatively, you may choose the option of writing the metric tensor using the covariant components dxμ and (dual) basis vector eμ

Whether ds2 is written in the contravariant or covariant form, you can be sure that the distance between two points must be the same, no matter which coordinate system you employ.

A second even more fundamental physical interpretation of the g metric tensor is linked to the time  measured along the wordlines, i.e the Proper Time.

We recall from this article that given a  manifold with a local coordinates xμ and equipped with a metric tensor gμν, the proper time interval Δτ between two events along a timelike path P is given by the line integral

This expression is, as it should be, invariant under coordinate changes.

The fundamental difference between Special and General Relativity regarding the metric tensor is that:

- in Special Relativity, gμν is a known given constant denoted ημν - called the The Minkowski metric, and of which the (1,3) signature defines a Lorentzian manifold.

- in General Relativity, gμν is not given a priori but is a function of space and time: it must be calculated by resolving the Einstein's equations, and its signature defines a Pseudo-Riemannian manifold. 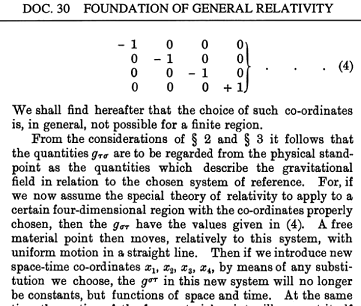 [1] The notions of contravariant and covariant components as well as basis vectors have been defined in the article Introduction to Tensors.